Another nice day at the lake 11 skippers showed up and were greeted with a wind just North of West around 12/14 knots ( guessing) it was A suit and sometimes a struggle especially towards the end when Roger Bowtle was on B and clearly had the upper hand on the beat and the run well it was marginal. Mick Chamberlin was quick out of the box with a win but Gordon and Ivan were hot on his heels, Gordon took the next two races, and then Mick got four wins on the bounce. The racing was close and the fleet are getting better at both set up and tactics, The races were quite long today and only 7 quality races were completed, Roger got better as the day went on and finished with a second that in all honesty should have been a win, but the practice practice practice with the boat will help, just keep at it once you master the trim, you are halfway there. Ed Whitaker is improving every week and just pipped Mick Cooper on countback , A few missing faces today for this the last of the Winter series. But I am sure when the summer series starts we could be looking at 12/14 boats out each week for this fabulous series . 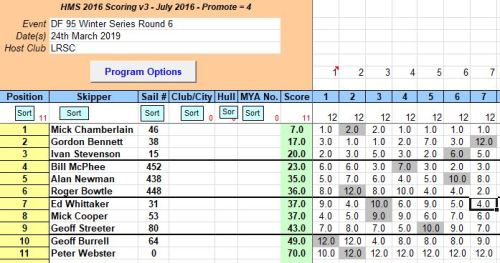 Like Loading...
By ivansteve in Uncategorized on March 24, 2019.
← RM Ranking 2 at Lincoln Midland District Winter series Race 5 at Lincoln →