Home » Uncategorized » The Clive Hand Memorial Trophy and M.D.W.S round 1

The Clive Hand Memorial Trophy and M.D.W.S round 1

The day dawned quiet and foggy as the race team awaited the arrival of 30 competitors to Scotland Farm, Kettle was on and bacon butties made ready, but the lake was a different story, apart from the very close buoys only a few coots could be seen scurrying away about there business in the early morning mist, The sun was trying but as the competitors started to arrive it was painfully obvious that B suits would not be used today. The Lincoln club helpers turned up in force from far and wide to try and make this event work well Norman setting up his caravan as the race office complete with flag pole Seymore  did a grand job sorting out the car parking , Caz and Tim had a steady stream of customers for Bacon Baps and tea and coffee. By 0930 there was little change one minute the flags were fluttering the next hanging like rags, a half hour postponement was announced with a loud hail of the whistle, and by 10 20 it became apparent that we would be sailing from the south bank and a course was laid , the briefing was held and the first of the two seeding fleets (B) were on the water making the way to the start in 1/2 knots of wind , amazingly the first boat finished the race 16 minutes after starting , but that was about as good as it got  as the second seeding race did not finish until 1145 am. The race team decided that an early lunch was in order, in the hope that a breeze would fill in once the fog lifted , this was in fact the case but hey don’t get too excited we are still talking about drifting conditions with some drifting faster than others. By 1330 there was a significant change in the wind direction and racing was moved to the East bank and increased some times to a massive 3 knots , but as you all know in these conditions the clever guys always consistently do  the right thing and come out on top although not always in every race Well done to John Tushingham with his new design Vision, who won the event, his boat obviously drifted far quicker than the rest , Alex Corey finished in a very good second place with a home design, and in third place was Nigel Brown sailing his V8 Vickers design,  Thanks to all who made it a good day in spite of the frustrating conditions, I was extremely pleased with the general conduct on the bank, and rule observance saved us all a lot of time , Only seven races completed , so we must pray for wind a lot harder next time . race results are below and Sue Brown has very kindly allowed us to use her pictures of the event , so many thanks to her see link below the results 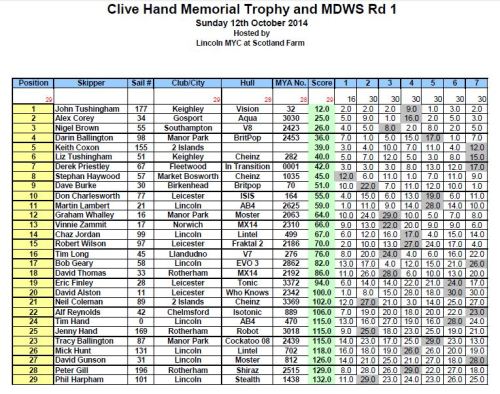 all pictures from Sue Brown at Cat sails

Like Loading...
By Micky Boy in Uncategorized on October 13, 2014.
← CLIVE HAND MEMORIAL TROPHY Prizes and pictures for the Clive Hand Memorial Trophy and the M.D.W.S round 1 →