A fantastic sun filled day with a super 10/12 knot breeze from the south east greeted 14 competitors who came to the line. A windward leeward course of two laps was set after the briefing which included a short talk on the rules and behaviour that was to be expected in the control area. This set the tone of the racing throughout the morning and behaviour was exemplary with rules being obeyed and turns being completed. Mick C 46 with his Britpop was determined from the outset to put some good scores on the board and in the first race secured the victory from a fine performance from Alan Newman 09 2nd place and Phil Harpham 101 coming home in third with his Stealth and brand new RMG sail winch. Bob Geary gaining a fourth and is counting down the days when his new Evo 3 hits the water . Race two again saw Mick C dominate but Martin L 131  came back strongly to get the second place and Phil again getting a third spot with some consistent sailing. Race three saw an end to the dominance with Martin posting a win with Mick in second and a brilliant performance gave Jenny H 169 third spot. The races continued with every race nip and tuck and it was pleasing to see everybody racing well and making some good tactical decisions on a tricky windward leg. This set of races has been the best we have had so far at Scotland Farm and a great attendance. Individuals can check out there results race by race below and will have an idea why they went well or not so well, and it should give some clear pointers at what needs to be done to improve for round six. 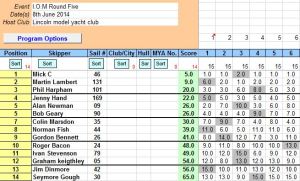 After the I.O.M races we had a cuppa and the 9 competitors brought their Dragons to line on a slightly shorter course and five fun races were sailed the competitive nature  was evident and some great scraps ensued , Both Jenny H and Roger B put their boats on the water for the first time, and I am sure enjoyed every minute of it . It was good practice in readiness for next weeks round which counts for the summer series ., There is a club boat but if you want to borrow for the races get you name in to Martin quick. Results below.

Like Loading...
By Micky Boy in Uncategorized on June 8, 2014.
← A LOVELY PEACEFUL DAY AT SCOTLAND FARM SUNDAY 15TH JUNE ROUND 5 “DRAGONS FORCE” →