Sunday 25th May was probably the first full day of racing at Scotland Farm that heralded beautiful sunshine a good top suit breeze from the south-east and some very exciting racing in both the classes sailed.                                                   I suppose we must start by offering our sincere thanks to Gordon for his hard work in sorting out and building a  lightweight trolley for the dingy that makes it easy to move launch and retrieve. It enables just a couple of guys to get it ready for the water. Also pleasing was the fact that everybody was keen to get going with the racing and there were 8 cars on site by 9am , this enabled us to get all the tasks done so we could start the racing on time at 10am so well done everybody.

First up were the I.O.M class with 9 contestants and Chaz did our scoring and also ensured we all observed the rules, (his boat is in the process of being repaired ) but did a fine job.A windward leeward course with two laps was set and it was clear from the first two races that Mick C meant business with two straight wins With Martin L,  Alan N , Bob G, and Gordon B all posting some very good results , race three followed a similar pattern Mick C being closely followed by Martin L, and a very good third place by Alan N. The breeze was constant but very fluky coming over the corner of the lake with some big shifts that changed with every race. Race 4 saw a big change with Martin L taking the victory and Mick C nowhere to be seen after getting in all sorts of trouble at the leeward mark, Alan N posted a great 2nd  with Bob G getting a well deserved 3rd , Jim D also got a good result with a 7th despite having radio problems . races 5 and 6 Martin showed his dominance with two first places which left Mick C with no answers. A fantastic mornings sailing that everybody enjoyed , Study the results below to see how you all fared from race to race , well done to Martin who shaved it from Mick , Also very well done to Alan with two 2nd’s and two 3rd’s. 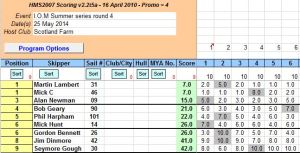 7 Dragons came to the line , the course was a little shorter but just as shifty with a top suit breeze , Th first race was won by Mick H after a fantastic start which did prove when you get a good start and clear air  you can sail your own race Martin got the second and Mick C third , Race two saw Chaz get into gear with a great second place and Bob G a pleasing third , All the races were great to watch with close racing , and in Race four  Chaz dominated and just crossed ahead of the chasing Martin, Consistency is the key in racing, and also possibly being conservative as well especially on the first leg of the course, try to stick with the leaders and then on the final beat make your move and put pressure on..  8 races were held  in pretty warm conditions and all those who laughed at Bob in the morning cos he had his shorts on, were looking at him in envy during the afternoon with temperatures up to 20C at least. results are below , so study them to try to remember what you did right or wrong ,,, round five comes up soon and it is all to play for .

Series results will go up tonight