Great turnout today, 14 Dragon DF 65 skippers made for a superb fleet, the  weather as far as being dry and not too cold was good (for November) but lacked a decent breeze, 1 to 2 knots max ,,  Sailing off the East bank trim and tactics needed to be spot on to get the most out of the very light “air-movement”!. great battles up and down the fleet and only four races due to very liht winds , Mick Chamberlain, took the honours and it was noticeable that he did all the finish line duty, he also won the Scotto  draw! £ 25.00 , “you need to be in it to win it” a new sheet will start next week ,,  overall a great days racing. Thanks to Alan N and Roger Bacon as OODs. with some guidance from Keith ,,  and all the helpers who got the stuff put away .
Alan Edgar
Many thanks Alan ,  We also saw the 10 Rater of Rob Wilson on the lake a fantastic sight of the big racing yachts
scores below for round two of the DF 65 Winter series thanks to Geoff Streeter

November , and it felt like it , fog,  no wind wet under foot.  But hey whats going on  14 skippers turning up for what i reckon is the worst day of the year so far ,, aha I got it Chaz is having his birthday party 76 years young and loadsa cake in the clubhouse yum yum.

Ok just after ten and a 2 knot breeze came in from nowhere and hey presto we were racing on the South bank, Chris took the first two races but it was nip and tuck with Jen Keith and Mick Ch all vying for a piece of the action, The wind increased very slightly which helped but due to the direction of the wind the course was a little one sided, Racing stopped after race race three to rewrite the score sheet as it was sodden wet , after the short break for the cake we moved to the East bank and the breeze filled in maybe 6/7 knots but was still one sided ( Just unfortunate direction ) Peter Cog was right up there Chris G found a loose bit of string which he pulled tight and the boat lunged ahead ,, amazing . Adrian was not having a great day but it is allways more dificult when you are organizing everybody, Great to see Roger back with us but water in his Tranny messed his day up.

Gotta say a great fleet out today and a decent bezze at the end Chris took the honours on countback and there was close racing all thru the fleet, Guys and gals just take a look at your disgard race try and remember where you may have gone wrong and rectify that mistake next time to get yourselves a better result.

Thanks to OOD’s and helpers 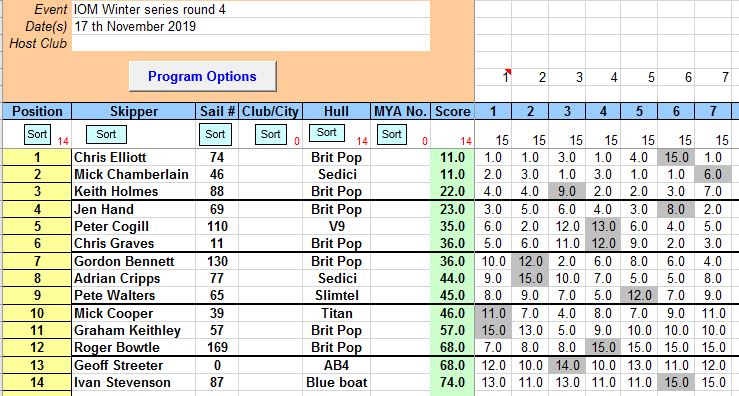 Fantastic mornings racing , 13 skippers turned up in this more than popular one design class. Racing took place on the South Bank, with a steady  A rig breeze around 8 to 10 knots from the North West, We welcomed a visitor from down sarf Neil and are sure he enjoyed the racing. Firstly I must apolagize for the lack of specific training , my fault entirely in failing to be clear what was  Required .

Keith H got off to a great start winning the first race with Mick and Jen hard on his transom, role reversed in race two with Mick taking the win from keith and Pete getting third spot. the racing was good up and down the fleet, and there were some great tussles, Mick and Keith had a good look as some skippers set ups, to try and maximise rig tune. The course was just a little one sided but it was the same for all. The sun shone and at the end of the morning we were all quite warm. Mick just took the honours but was pushed all the way, Bill just squeezed out Mick Co on countback. Have a look at the results everybody , and try to work out where you may have been able to do just a bit better, there will be races you remember vividly and think ?,$£!)(  .

Great racing , and thanks to Mick Co and Ed for officiating and Keith for handing out some info on adjustments to DF 95 rig

and the one design aspects means boat set up , and how you handle the start and first beat are paramount . 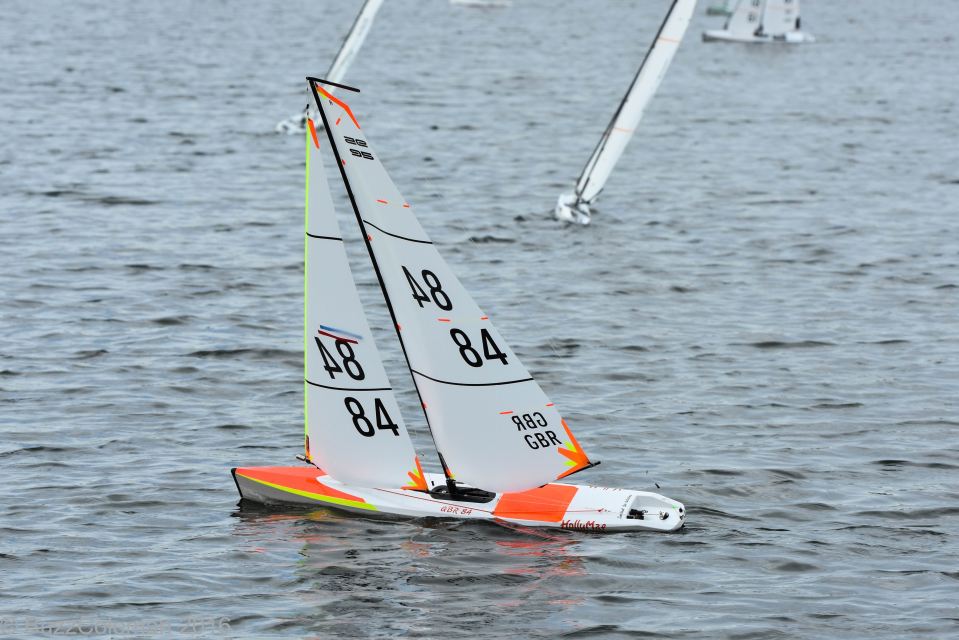 Several skippers and families enjoyed a great Saturday evening meal at The Railway on the day that the rugby world cup was decided.  A great time and much wine was had by all in the great local pub . Wow,  we arrived at the lake at 08.00, thick fog and not a breath of wind, but give it a couple of hours and the sun came out and a gentle breeze filled in from the South West to get racing started on the East bank. Quite a long beat and run course was set that gave the fleets three good beats, the shifty wind catching quite a few skippers out throughout the day, with the shifts changing in virtually every race. Seeding races were won by Chris Elliot from Lincoln and Derek Priestley from Fleetwood. The breeze had filled in after a short delay (the scoring computer not playing the right tune) and some exciting races followed, and with two fleets skippers got a break from the long walk up and down the bank. Race two was won by Nigel Brown from Gosport, last year’s winner of the Clive Hand, with second going to Rob Wilson and third  Tim Hand a Lincoln member. Race three and four were won by Darin Ballington sailing a Widget from probably 10 years ago but still in fine condition, Nigel Brown keeping his score low with a second in race four, Tim Long also got a great result in race four with a third but was to better this in race 5 with a bullet. As I said earlier, the shifts in quite a decent breeze were catching skippers out big time, so there were one or two glum faces.  That needed turning round.  Out came the famous sausage burgers with a few onions and smiles returned. Race six saw a 20 degree shift in wind to the west followed by a drop in strength and it looked likely it would fade completely but there was still a bit of pressure to enable  A and B to complete the course before the breeze returned to its original direction and increased a couple of knots to allow race seven to be completed.  There were some great battles up and down the fleets and skippers were extremely well behaved with the observers doing a great job. The final A fleet race in light winds had the Sedici of Nigel Brown take the gun and Tim Hand with another Sedici second and the widget of Darin Ballington coming home in third. All in all a great day’s racing , and our thanks to the many helpers from Lincoln and other visiting clubs to make sure we were all kept well fed and watered .  The race team from scorers, to  finish line team , observer getters , cake makers, bacon cookers , burger cookers , Just a Big Thank You . Also, the skippers – thank you very much for coming and we hope you had an enjoyable day and will come back and visit Lincoln again soon Club helpers who gave their time with help and support. With out them No event . Mick Chamberlain, Alan Edgar, Ed Whitaker, Ivan Stephenson, Greg Codling, Roger Bacon, Geoff Streeter, Gordon Bennett, Jen Hand, Jackie Chamberlain , and of course Jan Cooper, with the bacon butties. Non Club Members, Darin Ballington for help with HMS and in the dingy, Maureen Priestley  and Sue Benson for their culinary skills with the sausage burgers.   Results below

Foggy at 8am but we ave ad a great nite out down the Railway .

Getting busy by 9am

Make sure you are in the front seats !!!! 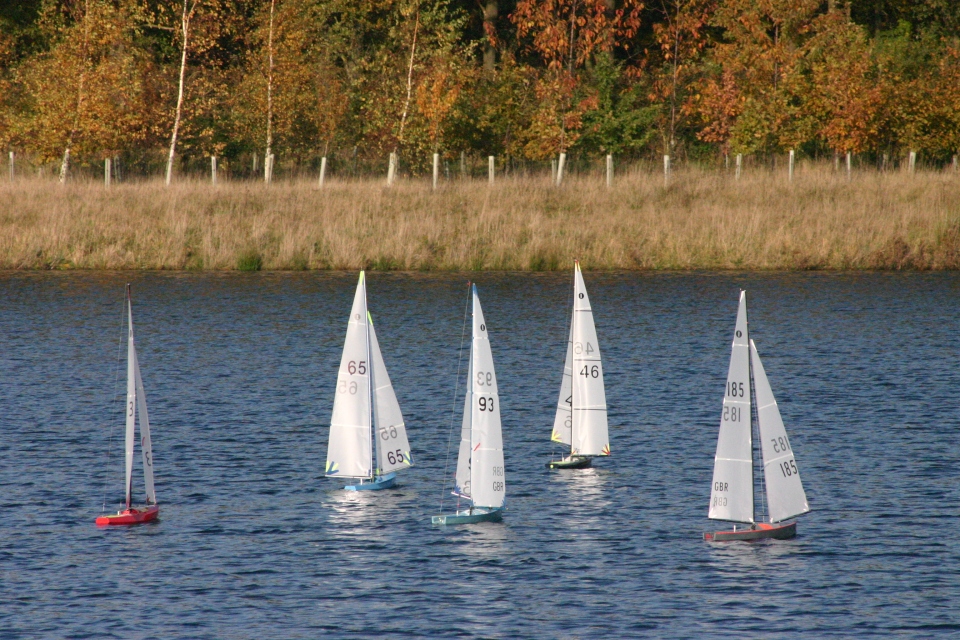 The long run to the Gate .

A few more pics here from Roger B Caz and Geoff , enjoy