Due to the non appearance of the scheduled RO it was left to the ARO to do his best. However the task was not too onerous due to the help given by the other competitors. As one skipper commented “if everybody does a little bit, a lot gets done” Grateful thanks to all concerned.

A rather disappointing 7 IOMs and 2 Dragons. Probably because there was a conflicting Ranking race and it was the Bank Holiday weekend. The wind was, as forecast, 10 – 12 mph from around NNE. As is normal for a Northerly flow there were many fluctuations both in strength and direction which led to some interesting racing. At least the day was dry and the sun came out eventually.

Another great day of racing at Scotland Farm, 12 skippers turned out including 2 visitors for round 2 of the summer series. Steady south westerly breeze 5/8 knots and clear blue sky gave the skippers some challenging conditions and a great eye sight test as the windward mark seemed to be in another village. Racing was very very close, and if you got ahead you had to cover your _____e Some notable results that wee nice to see were Gordon and Bert getting a 1st and a 2nd each, in all 6 different skippers recorded a 1st place .   At the end of the day Mick C took the honour’s by a whisker Bob Geary series leader came home 2nd and one of our visitors from Fleetwood Michael P getting 3rd slot . Many thanks to all for barging on the start line and the good humour in which you did it, Thanks to the visitors for putting up with us. Next race in the series will be on the 12th June. so if you wanna be a part of this great series. !!!

A great days racing at Scotland farm , Fresh south westerly winds gave the mixed fleet a real test. The rain stayed away and everybody had a great time. Results below , and I am sure there will be a full report coming in the next few days. Well done to the lady’s who all helped with the bacon butties tea and coffee and the all important scoring , many thanks to Ivan, Roger and the finishing line team , sorry if I have missed anybody out , I am tired and need some sleep after an exhausting days racing, Thanks also to the competitors who made the event so enjoyable . Well done to David Darwell and John Tushingham who won their respective classes .

A warm bright morning greeted the 14 skippers with a wind which was generally from the NNW, but with variations. Strength varied from a very pleasant top suit blow to “where has all the wind gone” 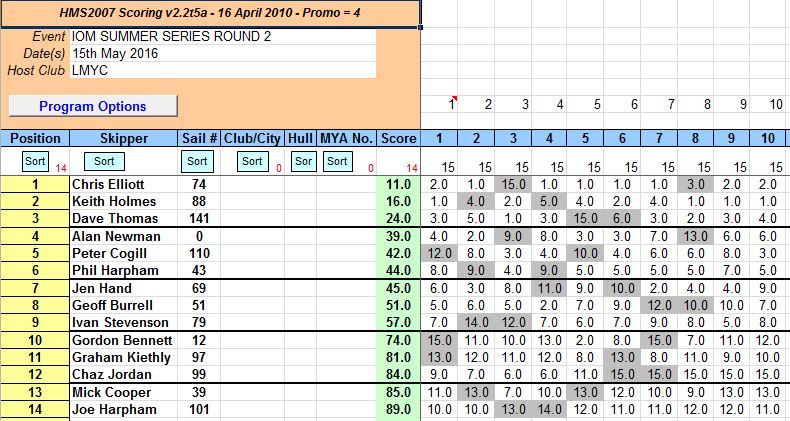