With a cool Northerly blowing down the lake this was always going to be a quiet day for the Radio Marbleheads , and with Martin otherwise disposed it gave the chasing pack a chance to come good , Only three R.M’s came to the line with a further five International One Metres , the breeze was steady and top suit was held by the I.O.M quite easily . The first race was won by Bob Geary 13 but a broken sheet just before the second race started ended his dream there and then , Colin Marsden 75 went on to win the next two races , but then race 4 and 5 had Bob back on top , the final race was won by Colin and with it the days spoils, Ivan Stevenson managed a second in race 2 and 5 and was not on top form for the day , If Bob’s sheet had not parted in race two it would have been a different story, there is a lesson there and Bob needs no telling ,,,, make sure you don’t have any breakages . Results below and on count back Colin with three firsts gets the nod sorry could not correct the sheet .

After a swift lunch break out came the Dragons only 8 I am afraid to say , I think the weather may have something to do with it. A massive downpour had a couple of competitors rushing for cover ( car ) and missing two races and the next to  race was sailed in about 1/2 knots of wind , by the time it finished there was not a breath of wind and race 8 was not sailed ,, results below , and every body was keen to get away and have a hot bath after the soaking we had in race 5 Well done to Ivan and Jenny  3/4 respectively you both sailed some very good races,,  a tip for Chaz,, pop along to Morton boats to get some new waterproof ‘s ,,, one with a zip would be nice . and for all those guy’s who have to wear glasses just GOOGLE      aquavis  they are about £ 10.00 a set but it stops your glasses getting wet !!!! 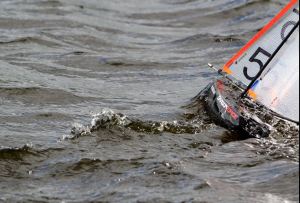 Another fantastic day greeted 16 competitors who came to the line for round 6 of the International One meter’s Class. Light winds from the West gave the boats a tricky beat, and eased sheets were the order of the day to keep the boats moving . Mick C’s new AB4  hit the water for the first time and had a dream start winning the first race although an element of luck may have played a part , It was nice to see Bill Cox 07 making his first visit to the lake since joining, and showing of one of his Triple Crowns , It was also nice to see some wives at the lake side relaxing whilst the husbands got on with the serious side of things , Bob Geary in a borrowed Brit Pop showed what can be done when you upgrade with a fine second place overall, also two very good performances by the older Gadget design with both  Mick Hunt 14 and Colin Marsden 35 gaining three victories between them during the morning.

You will all see from the results that there was some very good sailing from many club members and you will no doubt be looking at the race you have discarded,,  to see if perhaps you could have done a little better next time . I felt the rules were played out very fairly,  but I would urge you all to brush up with the rules game on the website,, it is a lot of fun and there is a level of competence  for everyone so test yourself and see if you can come up with all the right answers, I must confess I still don’t every time !!!!! 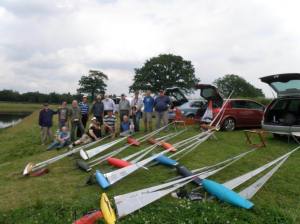 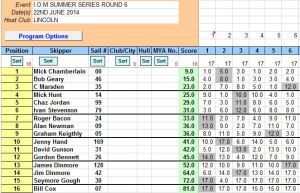 Testing conditions with glassy smooth water for all concerned .

11 competitors came to the line for round 5 of the Dragon summer series , there were a few tired eyes as we were still getting over Italy beating us in the first round of the world cup , Disappointing I know but if Roy makes one change to the team we should go all the way, the player in question always seems assured his place in an England shirt, but this now has to change, his recent hair transplant has done nothing to improve his sluggish performance, and the plane awaits to take him home to Manchester despite his roots being in Liverpool/ Everton . Enough of all that and on to the main event which was hotly contested with some great performances  from different skippers made the racing both tense and exciting, from my calculations 5 different skippers each had a win, With Phil Harpham 44 finally coming out on top with 10 points from 8 races , early leader Bob Geary with a 2/1/3 in the first three races slipped a little as tiredness took hold, and Gordon Bennett sailing the race of his season finishing second , a superb performance that I am sure will give him the confidence to re-cut his jib ready for round 6, Chaz finally back after his recent trips also scored well but just faded towards the end of a very tiring morning. The wind was from the North and a good top suit breeze had place changing on the windward leeward course.

picture of the recent Nationals at Keighley courtesy of Sue Brown

SERIES SO FAR RESULTS ARE POSTED

A fantastic sun filled day with a super 10/12 knot breeze from the south east greeted 14 competitors who came to the line. A windward leeward course of two laps was set after the briefing which included a short talk on the rules and behaviour that was to be expected in the control area. This set the tone of the racing throughout the morning and behaviour was exemplary with rules being obeyed and turns being completed. Mick C 46 with his Britpop was determined from the outset to put some good scores on the board and in the first race secured the victory from a fine performance from Alan Newman 09 2nd place and Phil Harpham 101 coming home in third with his Stealth and brand new RMG sail winch. Bob Geary gaining a fourth and is counting down the days when his new Evo 3 hits the water . Race two again saw Mick C dominate but Martin L 131  came back strongly to get the second place and Phil again getting a third spot with some consistent sailing. Race three saw an end to the dominance with Martin posting a win with Mick in second and a brilliant performance gave Jenny H 169 third spot. The races continued with every race nip and tuck and it was pleasing to see everybody racing well and making some good tactical decisions on a tricky windward leg. This set of races has been the best we have had so far at Scotland Farm and a great attendance. Individuals can check out there results race by race below and will have an idea why they went well or not so well, and it should give some clear pointers at what needs to be done to improve for round six.

After the I.O.M races we had a cuppa and the 9 competitors brought their Dragons to line on a slightly shorter course and five fun races were sailed the competitive nature  was evident and some great scraps ensued , Both Jenny H and Roger B put their boats on the water for the first time, and I am sure enjoyed every minute of it . It was good practice in readiness for next weeks round which counts for the summer series ., There is a club boat but if you want to borrow for the races get you name in to Martin quick. Results below. 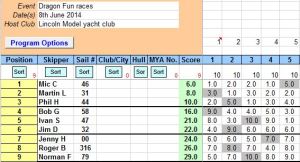